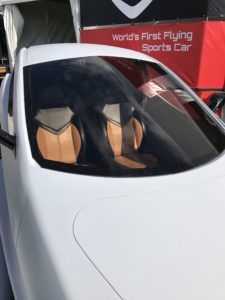 The front windshield was installed in time for AirVenture, which really helped give a sense for the lines of the Switchblade flying sports car.

With the wings swinging in and out constantly at the show, we ran up 3.5 years or more on the life of the wing swing actuator. The actuator was pulled from the wing shortly after we returned from AirVenture, and it showed very little wear. We believe we have found a good match for our wing swing in the Switchblade! One minor but fun feature added were the seat belts. Below, CEO’s Assistant, Martha Bousfield, is shown seated in the Switchblade flying sports car testing how the seat belt installation felt like as a user. The trick was to make it easy to buckle up for driving or flying, but have the belt be out of the way when getting baggage out of the back of the cabin behind the seats.

Completed after AirVenture, now all carbon parts of the tail are finished and ready for assembly. We are part-way through the process of making all of the metal pieces for the tail, and when done will assemble the tail and mount it to the boom.

Right after AirVenture, Central Oregon was one of the first places in the US that you could view the total solar eclipse. While we had many of our Owners and Samson backers visit during this time, we also took a photo of the Switchblade during the eclipse, and wanted to share that with you. A wide angle lense is not the best way to view an eclipse, but the image including the Switchblade was still interesting to see. The photo below was taken just after 10 am, PST.