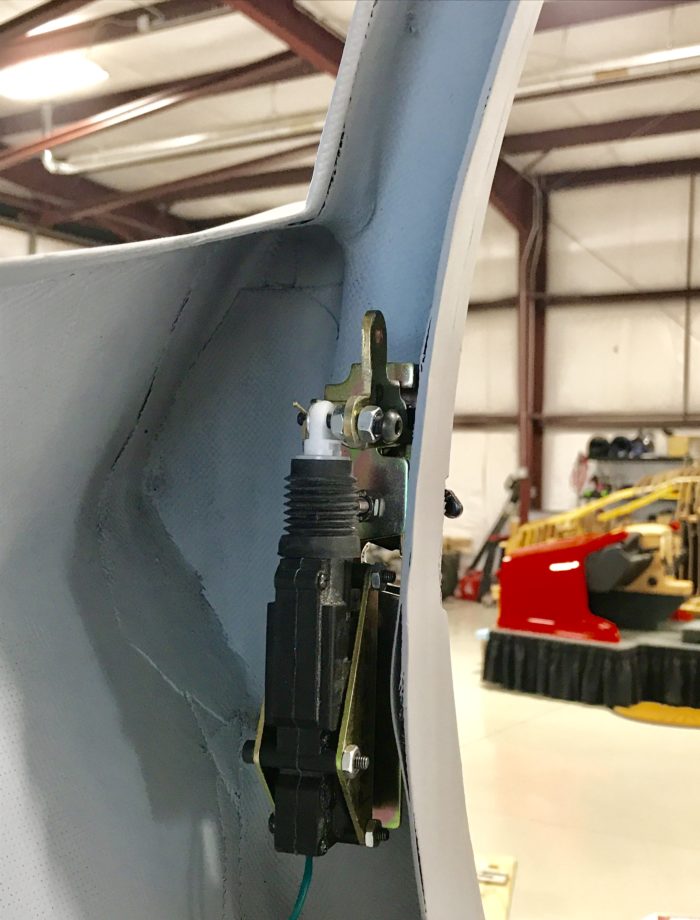 Above is a close-up view of the power door lock that was installed in each door. The Switchblade flying sports car doesn’t have an outside door handle. It is opened by using the keyless remote to trigger this door latch, which pops the door open so you can grip the door and open it further. Called a ‘shaved door’, this type is used often in custom cars for a unique look. In our case, it offers less drag noise from protruding door handles during high-speed flight.

Below you can see the work being done on the power window installation. The door windows are still covered with a paper wrapping to help protect against scratching while we fit and test the power window openers, gaskets, and guides that this type of window requires. In this image, the power window opener is shown fixed temporarily in place while we measure the clearances and test the operation. Once we are happy with the fit, we will build the final mounts for the door opener, and connect the system electrically to the rest of the body controls. On our Facebook page you can see a cool short video of the window opening and closing. 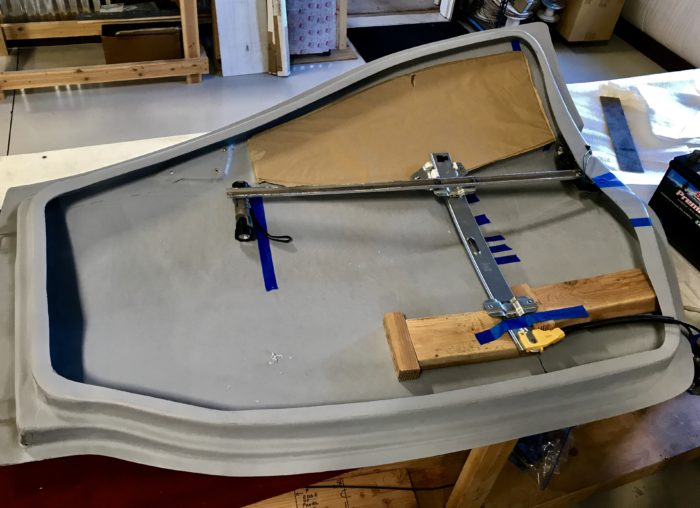 Another cool thing we have been working on, while we wait for the tail metal pieces to be made prior to assembling the tail, is the stereo system. Pioneer is our chosen Original Equipment Manufacturer (OEM) for the Switchblade. We needed an XM ready system, as we would like to offer both the XM radio experience as well as the XM weather for flying.  Pioneer had a system configured the way we wanted it, with Bluetooth connection to smart phones and tablets for audio files. They paired it with suitable speakers, and we were able to test the setup in the Switchblade to hear, in the real world, where the best location might be for the speakers. It ended up that the best sound was found where most other cars locate their speakers: large speakers in the forward, lower, part of the door panels and the tweeters on the pillar between front windshield and the doors (commonly called the A Pillar), or in our case perhaps the dash along side the A pillar.  The sound was awesome, and will only improve once the balance of the acoustic treatments are finished in the door and vehicle.

The tail boom was completed and arrived at our hangar for assembly. This is the first of two, and this one is slated for destructive testing. As we have mentioned before, we test using Part 23 Certified Aircraft Standards, as published by the FAA, even though we are an Experimental class aircraft, and not required to do so. For the boom, we are going to test the first unit to design standards, per the Federal Aviation Administration (FAA) regulations. If it passes, we will continue testing until it fails so we can see how and where it fails. Sometimes you find a failure where a reasonable improvement can be made to extend the safety margin of the unit. If we do, we will make that change, and install the second boom into the Switchblade flying prototype for future flight testing.

The boom is shown below actually upside down. The bottom of the boom is facing upwards, with the attachment tabs for the two small mini-verticals, or blings as they are sometimes called, pointing up. The main Switchblade tail assembly rotates and folds into the ducted fan area in the back so that it is out of harms way to the rear. There are two small blings that remain fixed to the bottom of the boom and do not rotate, and act to increase the yaw stability. After the last wind tunnel testing, we saw that we were right at the edge of stability in yaw, and wanted more margin for safety. The fixed vertical ‘blings’ were added to give that margin. Actual flight testing will show whether we really need those blings or not, and this is just the sort of thing that flight testing is for! 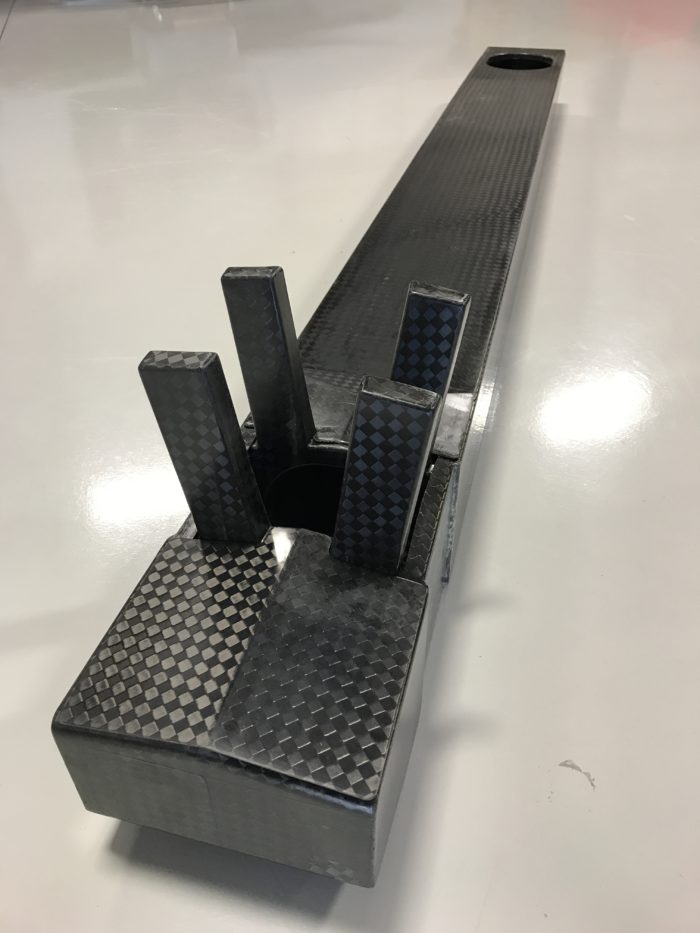 The carbon work on the boom is very nice, and the finish excellent. We almost wish we didn’t have to paint it. Phoenix Composite Solutions of Michigan completed the booms using aluminum molds. The metal molds provide a much nicer finish than the temporary molds we have been using for other parts. The smart thing about the temporary molds from Composite Approach and Composite Universal Group is that as we assemble and find out ways to build the Switchblade better, we haven’t invested in really expensive molds that we would now throw away!