After finishing the flaps, we have moved on to the main wing.  The left main wing skin molds have been carved, along with the fixtures for holding parts in place for later assembly.  Below is seen the molds nearly ready for laying in the carbon fiber and core material.  This is probably the single largest piece of the aircraft, being over ten feet long each.  The body is larger but is in several pieces (we have replaceable nose and tail in case of an accident while driving). 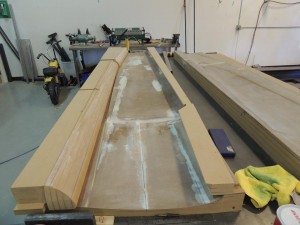 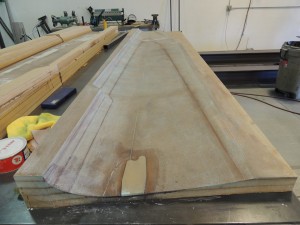 When the wing skins were completed, the parts were laid up and put into the oven for curing.  The oven ensures the composite material is completely hardened, and readies the parts for assembly.  There is trimming after the part comes out of the mold, but little else to prepare it until it is time for the adhesive application of other parts.  Below are images of the left wing skins just out of the oven. 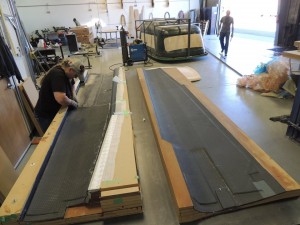 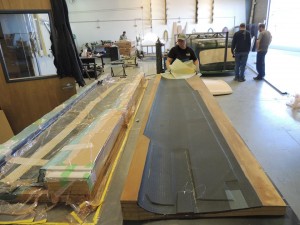 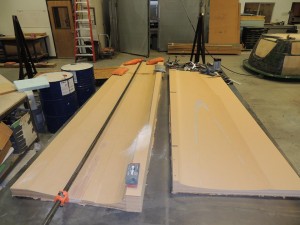 If you haven’t read it already, here is the newest article published about the Switchblade. http://www.bendbulletin.com/localstate/2402245-151/flying-car-nearly-ready-for-takeoff?entryType=0#

Samson made the news once again, this time on KTVZ in Bend, Oregon!
http://www.ktvz.com/news/flying-car-from-dream-to-reality/28325230

The plan is still to assemble the left wing completely, add the new custom metal hinges and attachments, and put it onto a jig or metal construct to hold the wing, allowing us to move it in and out, as it would extending or retracting into the Switchblade.  We will check tolerance and clearance in real life, and then probably have a party!  Finishing the wings will be equivalent to about one quarter of the build of the vehicle.