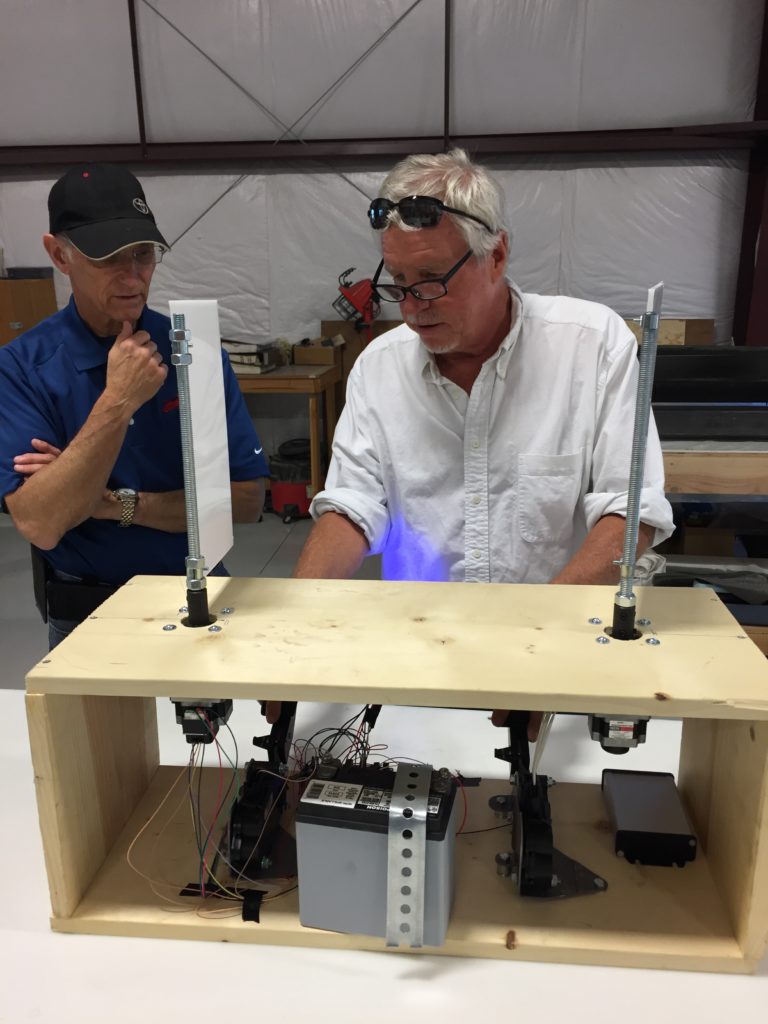 We recently had a visit from our Marketing Advisor, Barry Jay (left in above image). Among other things, Barry took part in a ‘work in progress’ presentation and demonstration of the fly-by-wire rudder system. Above, Keith Clark, the system designer, is explaining the workings of the rudder system as it has been developed to date. Barry, a 30 year pilot, also got to try to move the rudder against the efforts of the electric motor that controls the rudder, and both he and I found it nearly impossible to move the rudder against the system. This bodes well for real-life use, as the rudder would never be subjected to the forces that we were exerting.

Keith is seen below working on modifications to the system while at the hangar. Since that time, he has found a way to triple the speed of the motor while keeping the force the same. While still in development, we are very happy with the way it is going. 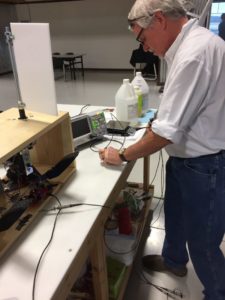 Another area of success has been the rear wheel hub and disconnect system. While heavier than the ideally designed hub would be, a stock Ford F150 4WD hub has a disconnect system that works very well for our use. As you probably know, the rear wheels are intended to be disconnected after take-off so that when you land, forces aren’t thrown back into the transmission and engine from the landing process. The Ford disconnect system should perform well to disconnect the two rear wheels in the air, and is a stock system that we can incorporate with only minor modification. For the prototype, this should work fine. Once in production, we may opt to create a special production run of the same system with a lighter-weight hub to shave some weight and use that to increase useful load. Below is an image of the existing wheel hub.

Another portion of the body molds has been made. The rear bulkhead, called a firewall as it separates the engine from the passenger compartment, has been created and is now ready to make parts from. This is a major piece, as the engine, transmission, and rear suspension are all hung from this panel. Needless to say, it is a fairly beefy structure. You can see the mold in nearly finished form below.

Lots more in the works. Check back in a day or two!