We are getting ready for the assembly of the main wing.  As shown in the image below, the main wing has four ribs: one at the wing tip, one between the ailerons and the flaps, one in the middle of the flaps, and one at the wing root.  The ailerons are the small movable wing surfaces near the wing tip.  The flaps are the larger movable wing surfaces next to the body, and the wing root is the section of the wing that abuts the body.  The images shows the main and auxiliary spar running down the middle of the wing, end to end, and the ribs, which are perpendicular to the spar (main beam).  The top skin of the wing is shown ghosted so we can look into the structure.  The ribs have holes in them for passing the tubes that are used to control the ailerons and make them move.  The tubes are connected at the body to pilot operated controls, and we have a fully mechanical control of  the  ailerons, with electrically operated flaps.

CEO, Sam Bousfield, inspected the spars at Composite Approach recently, and although they seemed very stout and stiff, they were easily picked up, even at one end.  The carbon fiber material is terrifically light for the strength it can provide. 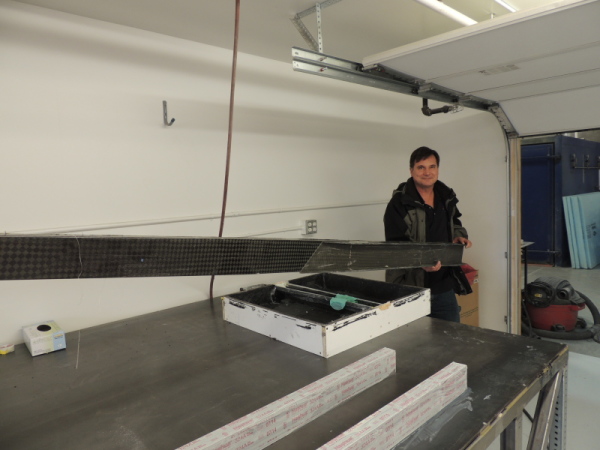 The two spars, when glued and bolted together, will fit like you see below. The auxiliary spar, left, runs just over half-way towards the wing tip. The main spar, right, runs the entire length. 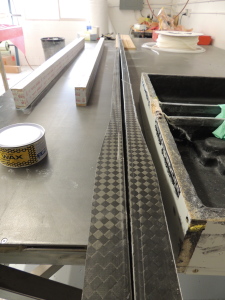 The ribs are the last of the main wing pieces to be made, and the molds are now completed. One mold being carved on the computer controlled milling machine is shown in the following image. 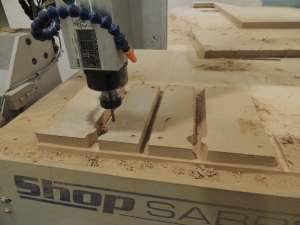 The ribs are scheduled to be laid up with the carbon fiber material and baked in the oven early next week, which will allows us to start the assembly of the mains wings, and then attach the ailerons and flaps for a completed wing assembly. When that happens, it will be a Happy New Year for Samson!