We have been validating some of the technologies that we are wishing to include in the future Switchblade engine. One of these is Hydrogen Boost to increase fuel mileage and reduce emissions. Hydrogen Boost has been used for decades to increase the efficiency of fuel burn in combustion engines, mainly diesel engines in Canada.

The systems run an electrical current through a small tank of water to produce hydrogen gas while the engine is running (so you don’t have to worry about storing hydrogen safely). This small amount of hydrogen is fed into the engine to work as a catalyst during the combustion cycle to increase efficiency.

Our first test was conducted using a pyrometer (heat sensor) connected to the exhaust from an OMC wankel engine (similar to the type of engine we are developing). A Hydrogen Boost system was installed and the engine allowed to run at 2,000 rpm with minimal loading until the temperature stabilized at 1275 degrees F (above).

While the engine was still running, the Hydrogen Boost system was turned on as the only change. The engine stabilized after a few minutes with more than 150 degrees F increase in temperature (below). We predicted between 150-200 degrees change if the boost system was actually performing as expected.

What this appears to mean is that more of the fuel is being burned, increasing the exhaust temperature as a result.  The added presence of hydrogen may have contributed to some of the heat gain, but there is actually little hydrogen contributed per combustion cycle, so we do not feel that the gain can be attributed to the hydrogen by itself.  Further testing on a dynamometer (measures power), with air mass flow sensor and fuel flow sensor will give us more of a picture.

The reason we feel this is important is weight.  If we can carry fewer pounds of fuel and go just as far or farther than we could before making any changes to the system (like this Hydrogen Boost), we can make a big change not only in the cost of flying by saving fuel, but in the reduction of emissions one puts out as he travels.  Both are important, and it is nice to find something that looks like it can reduce emissions and increase gas mileage at the same time. 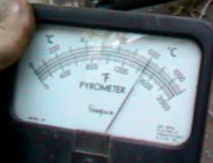 Regarding the Switchblade itself, ducted fan design was finished, and a small amount of tweaking in the duct is being done prior to the ¼ scale radio control model being built.  Bill Bohn of South Lake Tahoe is our experienced model builder, and he has begun with layouts, materials purchase, and has lined up the machining work needed to accurately reproduce the wing and body.  The radiator ducting will not be functional (no mini-radiator in there), and the duct will be closed off but this should still be similar to the real vehicle in the sense of drag (air resistance).

The radiators of the real vehicle should not produce any added drag.  This is due to a design which uses the radiator exhaust to provide a small bit of thrust (like a P-51) to overcome the drag of a radiator.  Steering is not likely to be functional on our scale model.  We are setting up the model, however, to allow us to change wing angle of attack and tail angle of attack, as you would a wind tunnel model, and may actually run it through a wind tunnel prior to flight.