We got caught up on a few things this week, one of which was showing you the fastening of the windscreen on the ground test vehicle. After we fastened the sheets in place and pulled the protective covers off the lexan, we were very impressed with the visibility and clarity. Earlier we were concerned that the steep angle might produce distortion, but it was perfectly clear. The future safety glass windscreen will provide both a larger view and clearer view so we can cross one more thing off our “worry list”. The windscreen will provide needed protection for the remaining high speed runs we will accomplish with the test vehicle. 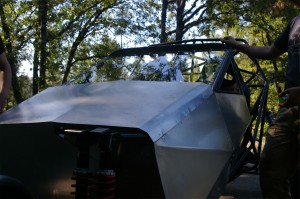 We are nearly finished with the design of the ducted fan. DAR Corp did a great job using CFD (Computational Fluid Dynamics) to generate a more workable shape for the ducted fan area. We are honing this with some proprietary methods to reduce the effects of negative pressure zones. Much of the negative pressure in the duct is used similarly to jet engines to provide thrust by pulling forward. The negative pressures facing aft work against that and we decided to come up with ways to mitigate these effects. We are analyzing the results for a future patent and will be able to disclose more about this shortly. 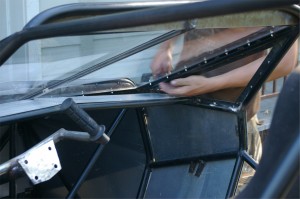 A test block was created to test a new ignition system related to Wankel engines. These rotary engines, similar to Mazda’s RX-7, provide light weight, compact power but have not received nearly the engineering development that piston engines have. As most in the industry would agree, the major areas that need improvement in wankel engines are gas mileage and emissions. Our tests and technology are aimed at improving both.

While the Hayabusa and other existing engines can adequately power the Switchblade, our future plans include a certified aviation engine capable of ground and air use. By having an engine of our own, we would be able to expand Switchblade sales and production, as well as provide an engine for our future ground-only version. There are other applications for this engine, such as portable generators, electric vehicle range extenders, auxiliary power units for aircraft and trucks, and marine generators or power units.

Our intent at Samson is to professionally handle areas related to the Switchblade and future expansion, including increasing the existing airport base, the training of new pilots and advancing the engine choices available.