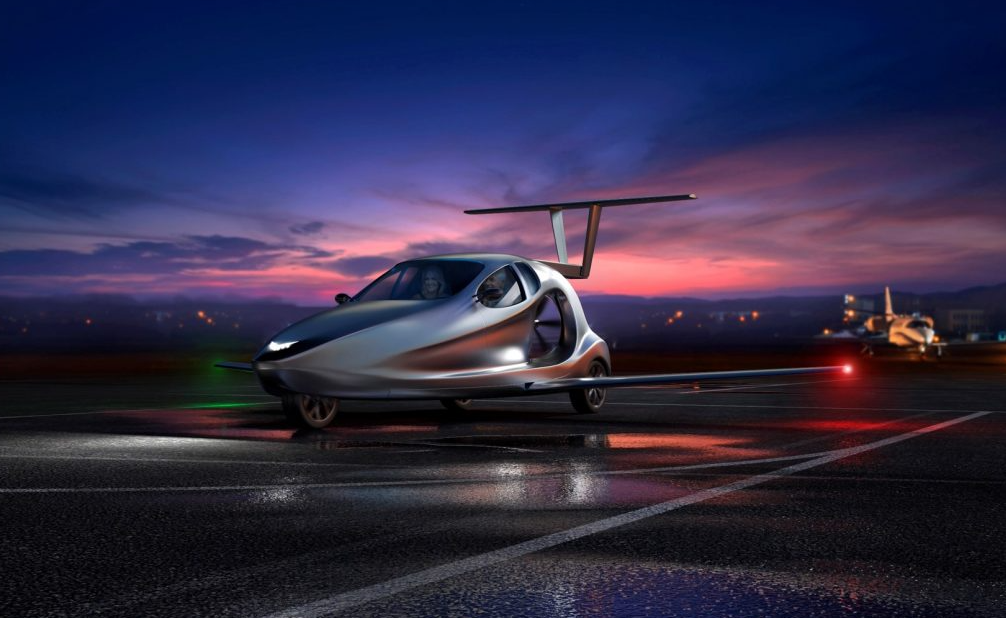 SamsonSky premiered the final version of its three-wheeled $140,000 kitplane flying car, the Switchblade, on Tuesday at EAA AirVenture and announced tentative plans for first flight within two months. According to Switchblade designer Sam Bousfield, the company holds 656 “reservations” for the vehicle, but will not be taking deposits until the vehicle has flown.

He said he and his small team of six full-time employees and five consultants had been working on the design for over a decade and to date and the company has invested close to $4 million in the project. After first flight, the company will begin taking $2,500 deposits and then progressive progress payments.

The company plans to offer a builder-assist program and that it would take the average owner three weeks to assemble a kit using the program and the company’s 10-station assembly line, Bousfield said. “Carmakers and a lot of airplane makers use that, so why not extend that to home building?” he asked. Prospective locations for assembly sites had been narrowed down to Oregon, Texas, Florida, and Nevada, he added.

Using Road & Track’s slalom testing parameters, the ground test vehicle outperformed everything in its wheelbase per Road & Track’s historical database. “We looked at a hybrid design originally, but there wasn’t one that really works. There was just too much weight. The battery solution is just not there yet.”

The vehicle is designed to provide a choice of left-hand drive or right-hand drive. Dual controls are also available, allowing for flight training in the Switchblade, which is classified as a motorcycle by the U.S. Department of Transportation. However, Bousfield said the design incorporates numerous automotive-style safety features, including front and rear crush zones and that the retracted carbon fiber wings can function as side impact beams.

Bousfield said the Switchblade can land in as little as 1,250 feet even at 10 to 15 knots above stall speed, thanks to its automotive-style tires mated to four-piston Willwood racing brakes. He said the vehicle has comparatively good ground handling characteristics despite its appearance and that the rear wheels are designed to slide and warn drivers when they are cornering too fast as opposed to tipping over without warning. The passenger restraints will be an automotive three-point passenger design for convenience but be equipped with aircraft seatbelt airbags.

A number of changes have been made from the original design. They include upgraded avionics with a 10-inch Skyview HDX main panel and an enlarged eyes-forward display. Pilots can change the colors and types of display, from round gauges to modern curved sliders, to suit their personal taste and ease of reading.

The avionics will convert between ground and air mode at the flip of a switch after the engine is stopped. While the base kit is a VFR aircraft, an IFR version—with Garmin GTN 650, backup radio, lightning protection, and heated pitot—will also be available. Additionally, the aircraft will feature a standalone angle-of-attack indicator.

“The Switchblade can be used in ground mode to drive out from under any weather that you may not want to fly through, so we originally felt that the VFR version would be the biggest use, and still do. There are quite a few professional pilots, however, who routinely fly in and out of airports with consistent thin fog conditions. An IFR version would allow them to pop through and then fly VFR the rest of the route,” Bousfield said. “We found this to be a market that was larger than anticipated, and we are glad that we are an experimental-category aircraft and can shift rapidly to expand our market and help more pilots.”

Other changes made in the last year include a new propeller design. The propeller shape was changed in the last three months so that the propeller rpm could be reduced further, allowing for a calculated 35 percent reduction in propeller noise generated at takeoff and during cruise.