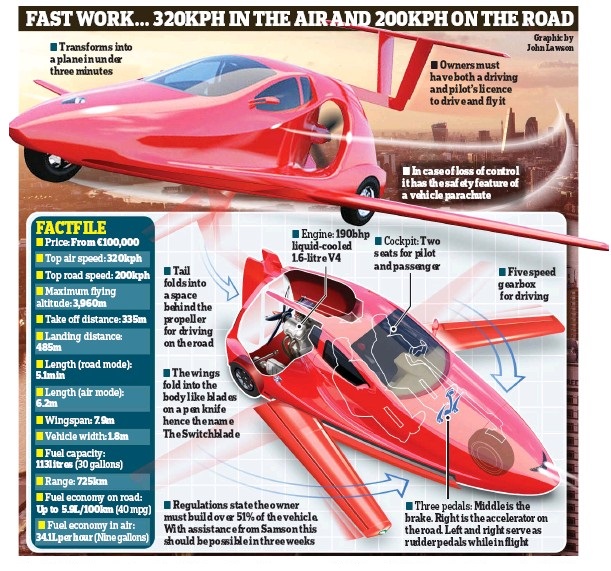 DESPITE years of promises, the idea of a car that turns into a plane has only ever been a flight of fancy.

But not any more. A manufacturer is claiming to have built the ‘world’s first flying sports car’ and is promising that it will launch 2018.

The Switchblade – named because the wings fold into the car body like blades on a pen knife – is a three-wheeler with room for two people.

Its American makers – Samson Sky, based in Oregon – say it will take flight in the spring.

But owning a Switchblade comes with its own very special demands, including an aptitude for DIY.

To comply with US law on accident liability, 51% of the vehicle must be built by the owner.

This gives it an experimental and homebuilt classification.

With help available at a Samson Build Assist Centre the DIY building process should take about three weeks.

Owners must have both a driver’s and pilot’s licence.

The Switchblade is about the same size as a standard car, it will be able to do 200kph on the road and 320kph in the air.

There is said to be room in the back for golf bags – the Snowbird model will include ‘re-locatable ski racks’ and the Trek model will have ‘beefed up landing gear for rugged terrain’.

It can be transformed into a plane in under three minutes at an airport.
Both wings swing out and the tail extends to put the vehicle in flying mode.
According to Samson Sky, you ‘literally fly the plane off the runway’. The Switchblade is said to take off naturally at 130kph with the wings extended. Samson says once in the air the flying car will have a range of 725km and fly at an altitude of around 4,000m.

Prices start at around €100,000 and it comes with a premium sound system.
The car lands like a conventional plane but it won’t be allowed to take off from the road. To reassure buyers there is a vehicle parachute.

Samson wants the Switchblade to be flying by April and to have cars delivered to customers by the end of the year.

Sam Bousfield, a former architect and the driving force behind the vehicle, hopes there will be up to 600 in operation within five years.

He has worked on the project for nine years and has received around $4.5million of funding to take the vehicle to the verge of flight.

He said: ‘There have been several times where I’ve said, “I’m not only in over my head but I’m looking up from the bottom of the pool”, but I never lost faith that we would get there.’