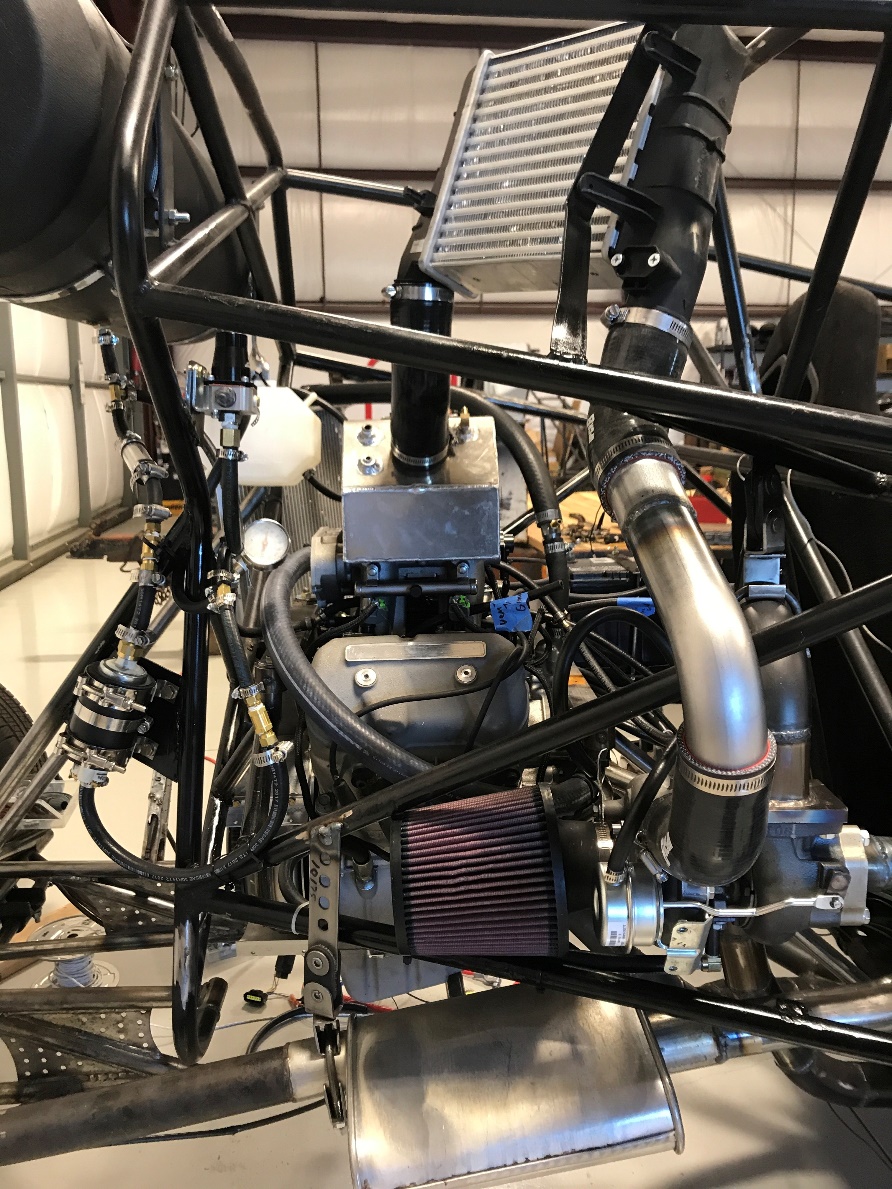 While most efforts were placed on getting the tail mounted and tested, a second crew worked on getting the ground test vehicle (GTV) ready for the track. The purpose of this is to validate the workings of the combination of engine and transmission components we will be using in the flying prototype. We have a bit of time still before the engine is installed in the flying prototype, and felt it was prudent to learn as much as we could in advance, in case there were minor tweaks to be done to the system prior to installation for flight testing. We also wanted to run extensive ground testing, and wouldn’t be able to do that with the flying prototype for some weeks.

The turbo-charger was installed earlier, and Tony Ragnone from Loynings Engine Service in Portland was tasked with completing that work. The image below shows the inter-cooler installed above the turbo-charger. An inter-cooler is like a radiator that cools the air compressed by the turbo-charger before the air goes into the engine. Engines operate on heat differences, and having cooler intake air makes an engine produce more power. You might notice that on hot days your car doesn’t seem to climb hills as well as when the temperature is cooler.

We ran oil cooling lines, and water cooling lines, to the turbo so that the turbo itself stays as cool as possible. The turbo is powered by the hot exhaust of the engine, and can reach very high temperatures if not cooled well. You can also see the high-flow racing air cleaner attached on the left side of the turbo. This is the setup that we used to achieve over 200 hp in our earlier engine dyno testing at Loynings.

The rear of the vehicle contains the engine, transmission, propeller, tail mount, and rear suspension. These are a lot of hard-mounted heavy items. Carbon fiber is good for many things, but supporting concentrated heavy loads is not high on the list. We felt that it would be best to support these with a tube frame made from Chrome Molly steel, and then hang a carbon skin outside of that. Chief Engineer Alexander Bondar ran the engineering team on getting a tube frame designed to be as light as possible, but able to withstand impacts from the rear. The Switchblade is also a ground vehicle!

We already have a replaceable bumper, similar to an automobile. Under that bumper section is a collapsible structure to provide rear impact protection. The bumper structure is hung from the rear of the tube frame, and is intended to slow down the impact as much as possible before the major force can hit the frame itself. The tube frame and rear suspension components are made up of over 150 unique parts. When I sometimes wonder why we aren’t flying yet, I remember the amount of detail that goes into this kind of a high-tech vehicle.