This update will focus on the rear of the Switchblade body, as the last post dealt mainly with the front section of the cabin.

Below is shown the rear of the cabin section. The tube frame for the engine is bolted to the rear bulkhead, and the rectangular hole in the upper middle of the bulkhead is the one through which the tail structure slides forward and backward. In the cabin, there will be a ‘sleeve’ that is part of the cabin ceiling to house the tail boom (horizontal structure) that will be part of that moving assembly. This will serve as a barrier between occupants and the engine compartment. The tail boom will slide into and out of the sleeve in the ceiling, automatically, when you change back and forth between flying and driving modes.

The vertical recessed area, or pocket, in the rear bulkhead shown above, has a special purpose. The engine has a water pump mounted to the forward side of the motor, and it pushed the motor rearward further than we wanted. To counter that, we have a pocket in the rear bulkhead to create a space for those engine pieces, and allow the engine to be mounted further forward. We are really fighting for space in the engine compartment, and every half an inch counts!

The body side panels are different looking than the rest of the carbon parts, as we added material to them after the part was originally made using the typical oven-cure carbon fiber part process. The pre-impregnated carbon cloth that we use has a hard time bonding to itself once out of the oven, so the typical handle for ‘twice-baked parts’ is to put in a layer of adhesive between the existing parts and the new cloth. This later oven cure with adhesive causes a milky streak to form at the edge of new and old, and you can see that in the image below of the area near the right edge of the body. 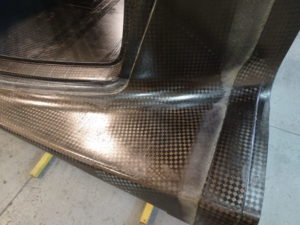 Coming soon is our first impression of sitting in an actual Switchblade body!