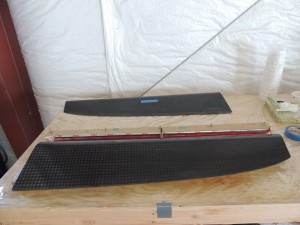 We have been busy! The ailerons have both been completed, and weigh less than two pounds each. Great job by our build team and the parts/mold team at Composite Approach. 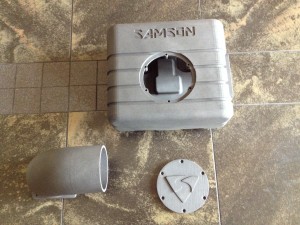 The intake manifold for the supercharger was designed and 3D printed. It is made from Nylon, and is very tough. We may make the final parts the same way until we are in a large enough volume of production to warrant injection molded parts. It will be bolted up to the top of the Motus MV4 engine, and then connected to the supercharger.

Next the mounting bracket for the starter motor was designed, fabricated, and bolted up. The clearances look fine and we will include that in the package sent to the engine tuners. 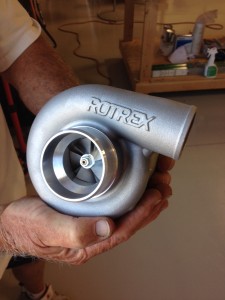 The supercharger was received, belting worked out, and it is also ready to be mounted (once the bracket is fabricated). This little jewel weighs a mere six pounds, which is almost thirteen pounds less than the competition. It is also built to last over 100,000 miles, so should perform well for us. 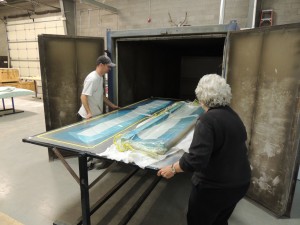 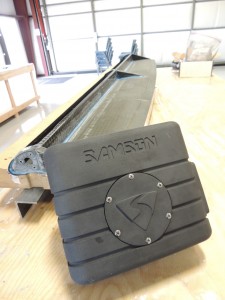 The Flaps molds were made, parts produced, and then the assembly put together to the extent possible at this time. We will leave the top skins off until mounted on the wing, so that we can have access to the interior hinge bolting points. Above right shows the completed flap compared to the intake manifold (air box). It is huge! Over six feet long. 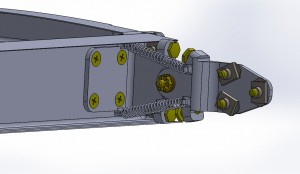 More work was accomplished on the tail structures, with the structures and the hinging and actuation mechanism 80% worked out. We have a little left to go on the portion that goes up from the boom to the horizontal, but that is the easy part. Nice work by our engineering team. This is a screen shot showing the hinging mechanism at the elevator (pitches the nose up and down during flight). Notice the springs to keep the elevators (moving parts of the horizontal tail) centered while stowed in ground mode. We didn’t want them loosely flapping around when driving to your final destination. 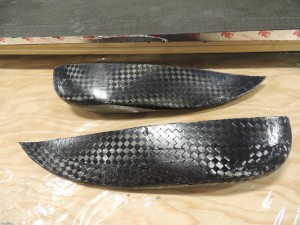 The main wings are at the mold maker, and we are carving the wing skins. The wing tips have been made, and you can see them here. There is a flat portion on the wing tip where the navigation lights are to be mounted. All parts made are from carbon fiber for extreme strength and light weight.

Much more done or in the works, but that will wait until the next time! We are also nearly 30 pounds lighter than anticipated on the design so far, and are working to hold that if possible. Most designs end up over weight, and we anticipated the same thing due to the nature of this first vehicle being a prototype (usually heavier than production vehicles). Wouldn’t it be great if we broke that mold and were lighter than we targeted?