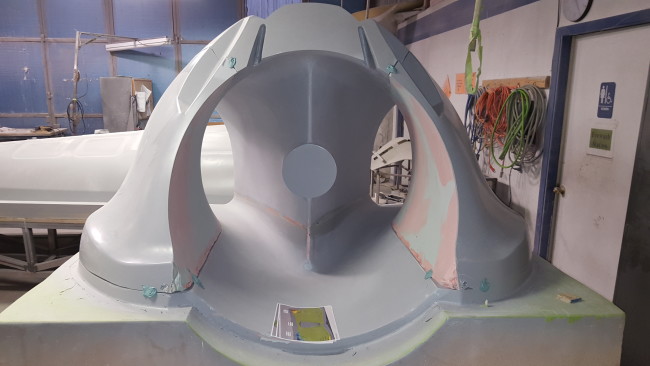 Huge progress this month. The image above shows the final plug for the rear of the Switchblade, looking forward towards the front of the vehicle through the ducted fan in the rear. There are four separate pieces to this plug, which were roughly positioned for this image so we can show how it will look once constructed. Each of the four ‘plugs’ are actually made to be separate, so we can use each piece to make molds from separately. The parts from each of the molds will then be made and assembled to make that whole section. This is done so we can get parts out of the molds, as we are dealing with very complex shapes! The image below is another view of this. These pieces were made at Composite Universal Group of Scappoose, Oregon, north of Portland.

Then we also finished the right wing. The image below shows the work by Ron Burch and Brent Burch as the top skin was bonded to the rest of the right wing assembly. Below they are shown doing cleanup after the top formers (metal plates that help keep the wing in correct shape during assembly) and weights were placed. There is always a bit of squeeze-out of the adhesive, which needs to be cleaned up for a good job and lighter part. 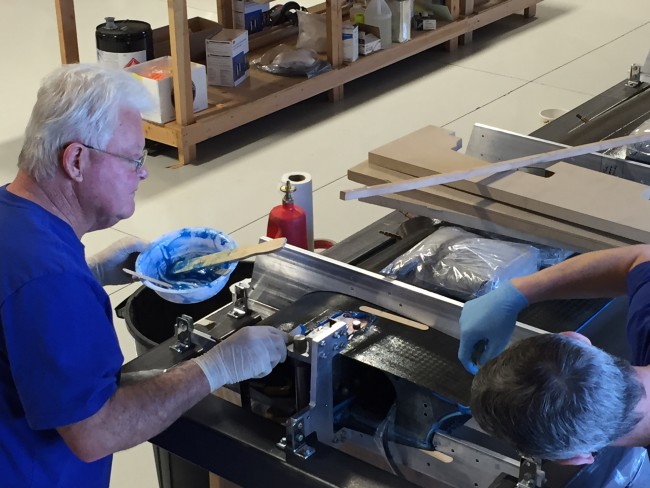 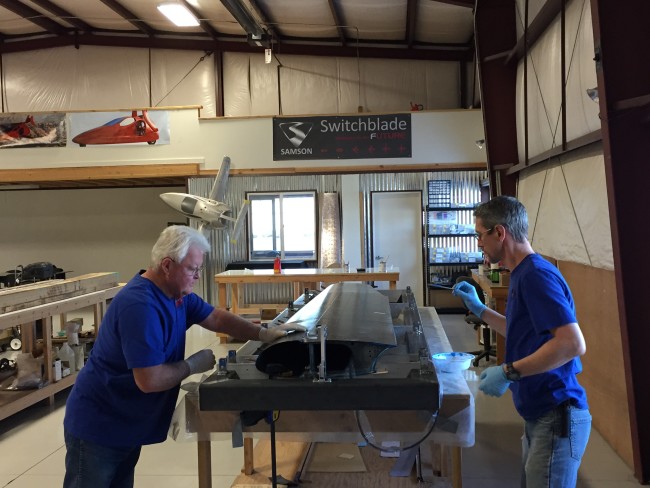 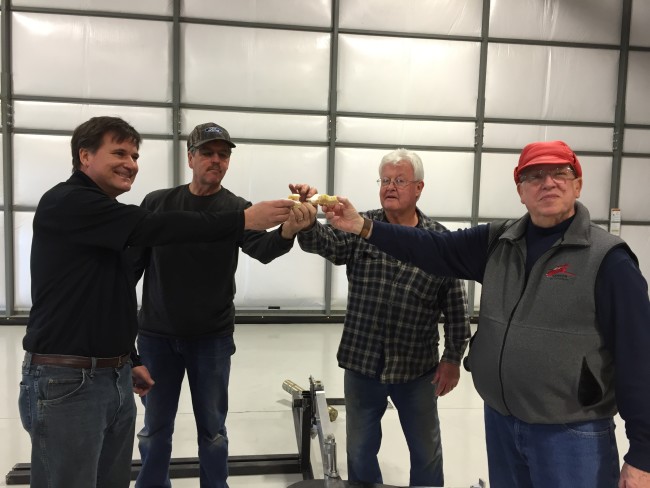 Above, we had our traditional ‘lemon bar moment’ upon successful accomplishment of a major task, and the boys were really happy with the way it turned out. When the right wing was weighed, it was just one pound different than the left wing. This is good news for the quality control aspect of the project. There are a few short videos of the right wing being finished (time lapse – kind of fun if we could really work that fast!), and of the testing of the wing swing mechanism on our Youtube channel. Click on the Youtube icon on the website and it takes you to that page. 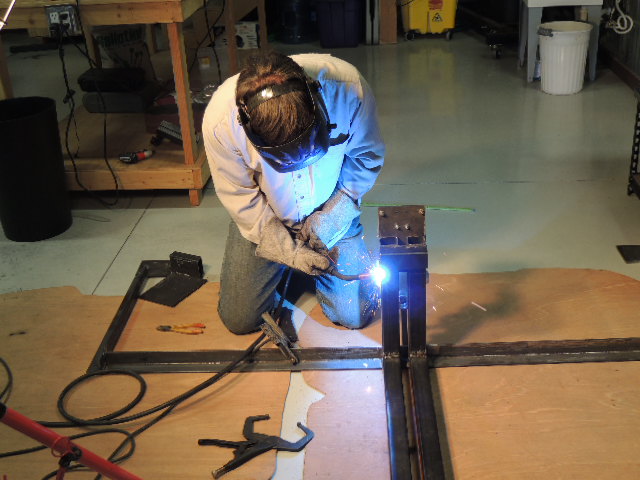 The wing swing was the biggest news, as we have been working towards that for several years, and it was one of the most critical milestones for us to accomplish. We passed with flying colors, as the mechanism worked exactly as planned. The wing was measured fully extended and fully retracted, and the measurements on both ends were within tolerance (nearly spot on)! Really great news! The image above is Sam welding up the test stand for the wing swing. Below are images showing the wing swing mechanism first in stowed position, with the hinge beams nestled tight to the wing in stowed position, as if ready to drive away. The next lower image is of the wing fully extended, showing how the hinge beams line up to take wing forces during flight. The patent for this has been filed, and we can show these images now, so enjoy looking at the heart of the Switchblade MMV. 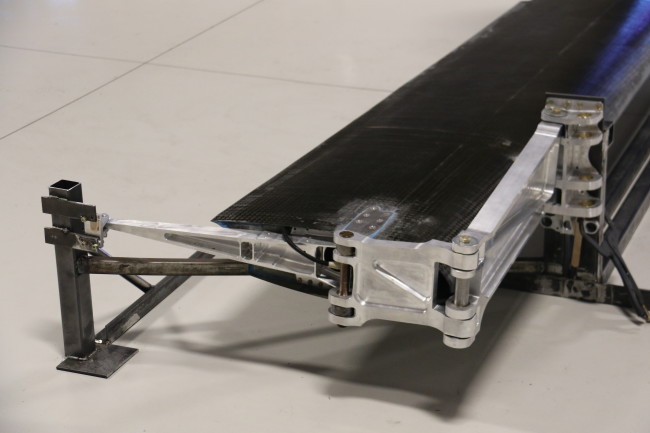 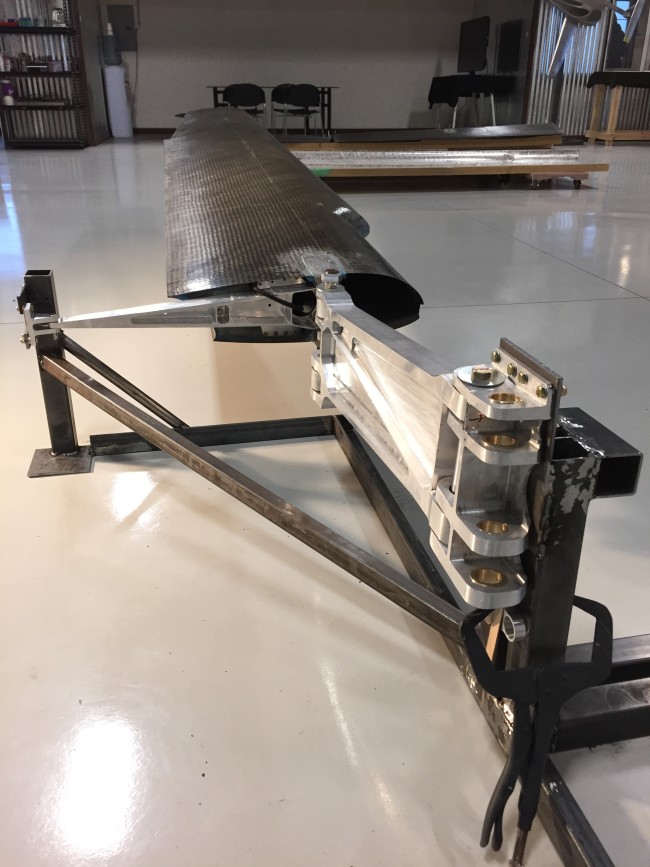 Not to be outdone, Composite Approach, of Bend, Oregon, has finished the left side body plug, and is now working on the right side body plug. The left side in nearly finished state is shown below. Our next big goal, as we move forward on completion of the flying prototype, is to put the main body halves together on top of the floor pan so we can attach suspension, wings, and the engine to the body. Doesn’t it look just like you imagined the body would look? We are getting to the stage of the project where it becomes much more ‘real’.

While we await the body parts, we will be working to mount the second wing to the wing swing test stand, and run the wings in and out using the electric actuator (something that makes things move). As I said at the beginning of this post, however, we have accomplished a tremendous amount in one month’s time! Many thanks to all who have helped make this happen!