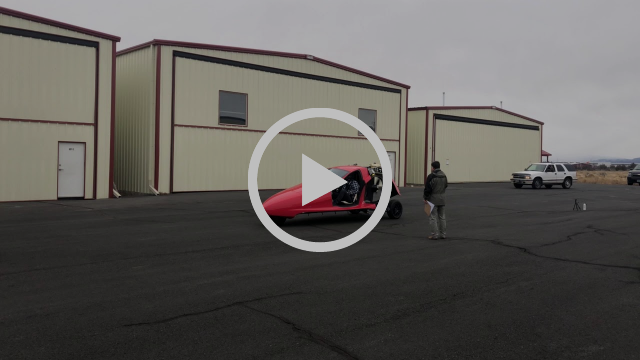 The Switchblade has what is called a ducted fan. Like a jet engine, the propeller operates inside a tube or duct, and spins with tight clearance of prop tips to the inside of the duct. We gain significant efficiency in doing so, and have a safer design for traveling on the roads at the same time.

Pilots would know that this check of engine and brakes is done each time before you take off, and is called a run-up. There is often a portion of an airport designated for doing run-ups, as it generates a lot of airflow and some noise and needs to be done in a safe place.

Directly below is a video of a portion of this testing. Below that is a short video of the prop spinning up after engine start. It looks like this is a turbine engine, but in reality this is just having the clutch in, and a small portion of the engine force moving through that assembly prior to the clutch being let out and the propeller being fully engaged. This is a big test for us and validates the propeller/engine installation accuracy.