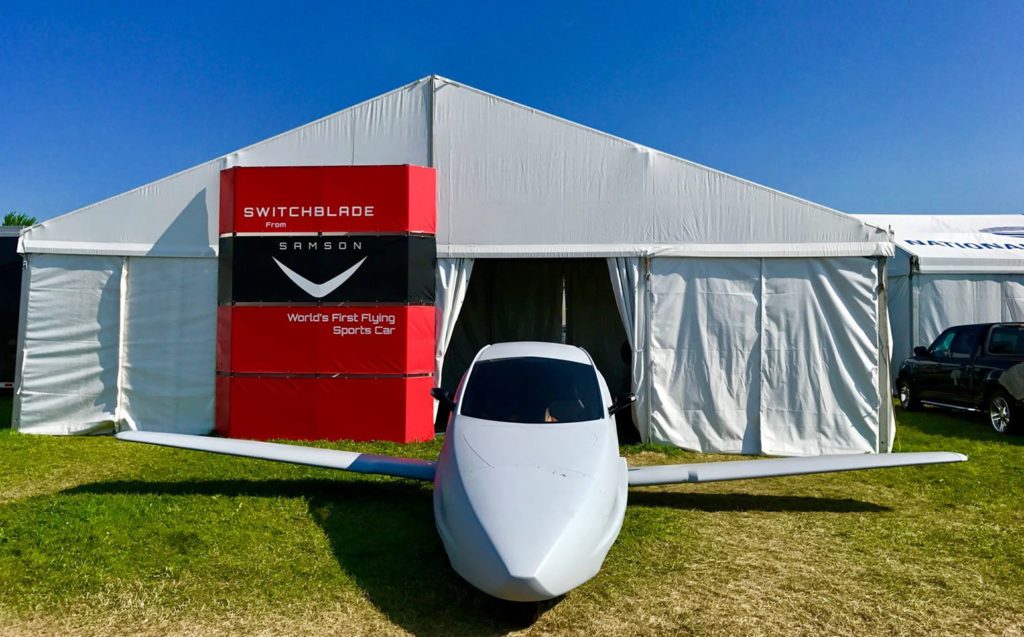 Samson Sky brought its pre-production prototype of the Switchblade flying-car design, which is still under construction, to EAA AirVenture this week. The vehicle “highlights the unique internationally patented wing-swing mechanism,” the company said. According to CEO Sam Bousfield, the company’s goal is “to produce the first commercially successful flying sports car.” The design will fly at 200 mph, the company says, with a 190-HP turbocharged V4 engine, and have a range of 400 miles. It will two carry two people plus 50 pounds of luggage, and will come equipped with a ballistic parachute, the company says. The aircraft design has been in the works since 2008. First flight is expected by the end of this year, the company said.

The Switchblade’s Italian-inspired clean shape is designed to produce a down force in gusty wind conditions, stabilizing the lightweight vehicle on the road, the company says. It will feature Dynon avionics as standard. The vehicle will be sold as an experimental aircraft, and owners will be able to complete the aircraft at the company’s builder-assist center in as little as three weeks, according to the company website. On the ground, it can be operated with a license for either automobiles or motorcycles.

← OSHKOSH: Samson accelerates Swichblade flying motorcycle deliveries to start next year It's a car! It's a plane! Actually it's both at the EAA AirVenture →