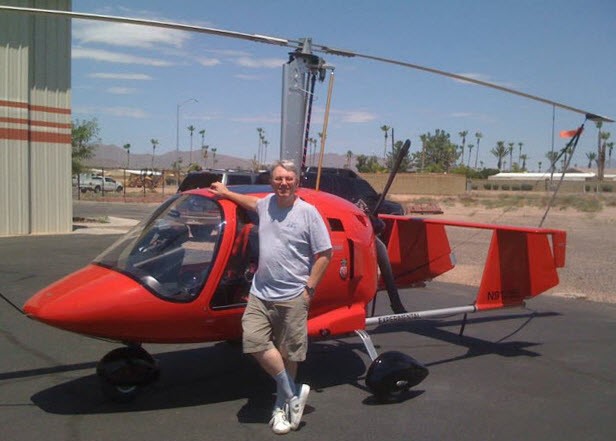 In short, I am confident in Samson’s approach to the business and the product.

I suppose my story is like many in that I began learning to fly but then allowed the pressures of work to get in the way… Years later, while in Hawaii on my honeymoon, I tried a flight in a weight shift control “Trike.” I was hooked once again.

I finished up my Private Pilot License, flying mostly Cherokees with the occasional Cessna 172 thrown in for good measure. These are fine planes, but (with no offense to those who love them) to me they felt like flying the family car (or maybe a minivan). Great to be up in the sky, but not particularly exciting flying.

So, with the passage of the Light Sport regulations, I bought the first-ever LSA-registered AirBorne trike. Bringing it home to Oakland International Airport, the tower controller asked for a flyby! Lots of fun flying folks over San Francisco & the Golden Gate in a (very) open tandem cockpit…

Well, if trikes are the motorcycles of the air, the next rating I undertook was for something more like a roadster or a convertible… Flying a Xenon LSA Gyroplane – side-by-side seating, doors on or doors off. Slow flight at 20 kts or cruising along at 80, and hard to get more maneuverable – short of aerobatics.

So, why a flying car? I suppose like many kids coming of age in the 1960s – watching the Jetsons, the Batmobile, seeing the latest Popular Science or Popular Mechanics article on flying, cars, and flying cars – I thought it would be very cool to have one. Later, whenever I’d make it to Oshkosh, I’d always seek out anything related to flying cars or roadable aircraft. And so it was that I began following Samson – from the first telescoping high-wing concept through the swing-wing redesign and first steps testing the components of what has become the Switchblade.

Why buy a Switchblade? Well, I wasn’t looking for another aircraft… But the idea of actually owning a flying car began to intrigue me. The British have an expression “horses for courses.” I suppose we Americans would translate that less poetically as “the right craft for the mission.” You see, for me the flying comes first – getting somewhere is secondary. I’ve made a couple of multi-state expeditions in both the trike and the gyro. I say expeditions because they last several days and on each there’s inevitably at least a day sitting on the ground waiting out weather.

So the idea of a Switchblade – not just any roadable aircraft, but one which is fun to fly and to drive – got me thinking about being able to get from point A to point B while enjoying the journey. I could take trips which took me further, in less time (and as less of an expedition), without weather delays – yet more safely than flying IFR.

Why build a Switchblade? I have thought it would be interesting to build a plane. I’ve done nonstructural, non-aerodynamic modifications to both of my (factory-built) Experimental Light Sport Aircraft. But I would not want to spend months or years building a plane. And, knowing how much I don’t know about aircraft construction, I wouldn’t want to undertake a build like that solo. So the Samson Builder Assist Program seems like just the thing for me. Get away from the day-to-day interruptions of life, work in a well-equipped build center and learn – not just overall aircraft construction techniques, but the specifics of my aircraft – from experienced builders.

Why buy in so early? As an entrepreneur who has built companies both from sweat equity and using venture capital, I know firsthand the pros and cons of the Samson Sky approach. I understand that when you’re building a business organically, investing your own time and money first – as Sam and Martha Bousfield are doing, you’ll do what it takes to get to the finish line with the best product possible. All the decisions I’ve seen Samson make thus far – be it the design approach using CAD, X-plane and fluid dynamics modeling; business decisions such as where to locate manufacturing, creative financing through pre-sales or the use of contract engineering up to this point; or the selective prototyping by building a ground chassis, 1/4 scale & wind tunnel models and interior mock up – speak to getting the Switchblade right the first time in the most cost-effective manner.

In short, I am confident in Samson’s approach to the business and the product. I am looking forward to the experience and satisfaction of building my own aircraft. And I am incredibly excited at the prospect of flying and driving my new Switchblade!