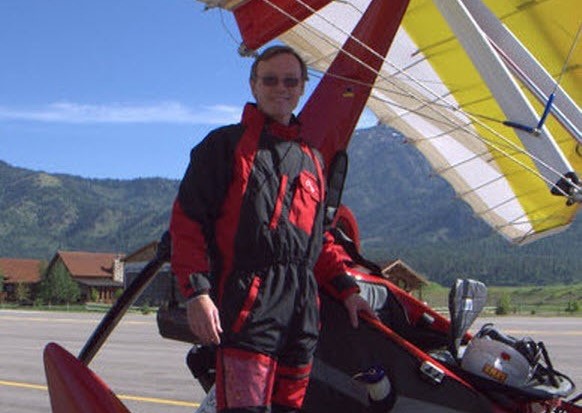 The Switchblade is the only choice for those of us who must satisfy the dream of flying our cars.

From my earliest memories, I dreamed of flying. I jumped out of a tree with a bed sheet as a canopy when I was 7 (I think a higher thread count might have helped.)  I built a lot of go carts and motorized bikes throughout my childhood. At age 13, I built an electric bike using my sister’s English 3 speed, a Chrysler starter motor from a large V8 and a car battery. It was a rough prototype but extremely fast. I was clocked by a car at over 50 mph and I learned what electric car drivers know now about the instant availability of torque from an electric motor!

At one point I lashed my brother’s hockey stick to the front of my bike and tied a bedsheet to the stick. I think it had promise but it would have been better in a windier part of the country.

One of my favorite sources of inspiration for projects in those days was Popular Mechanics magazine. In 1971, I saw an ad for plans to build a Rogallo wing hang glider. I bought the plans for $5, found a sail maker to sew up the sail, and built the hang glider in my parents’ driveway. After teaching myself to fly the wing by running down hills, before long I was jumping off cliff faces with a bearing wind.

Fast forward through the years – and flying took a back seat to college, more education, career type jobs, a family and the serious personal responsibility that go with each. My flying dreams were on hold as our kids grew and my career evolved. When I did get back into aviation, adventures included bi-wing glider kits, motorized trikes, fixed wing planes and eventually getting my Sport Pilot and then my Private Pilot license.

I’ve read about a lot of really interesting flying ideas, and attended many Light Sport and Experimental shows like Sun ’N Fun, over the years.  Then one day I read about the Switchblade, and about Sam Bousfield and his vision. It was at that point that I realized where my interest in vehicles and flying could both realistically merge into a single solution.

It was obvious to me that Sam’s ‘swing-wing’ design in a 3-wheeled car was the only realistic solution to provide convenient point-to-point transportation in a single vehicle – one in which the operator gets to choose the mix of flying and driving. The Switchblade is the only choice for those of us who must satisfy the dream of flying our cars.

Living in Kentucky for the last 20 years has also taught me to bet on the jockey, not just the horse. As a business owner, I know the qualities of a successful entrepreneur, and Sam Bousfield has them in spades. He has a clear vision that he communicates consistently, creating excitement. He steadily persists toward his goal and he is willing to make the personal sacrifices necessary to realize it.

Sam of course is confident in his vision, and yet he’s one of the humblest people I’ve met. He also is an extraordinary problem solver. Contrary to what many people think, successful entrepreneurial endeavors are a matter of putting one foot in front of the other to achieve the goal. Sam and his team are on the march, and I’m privileged to be a small part of the Samson Sky mission.