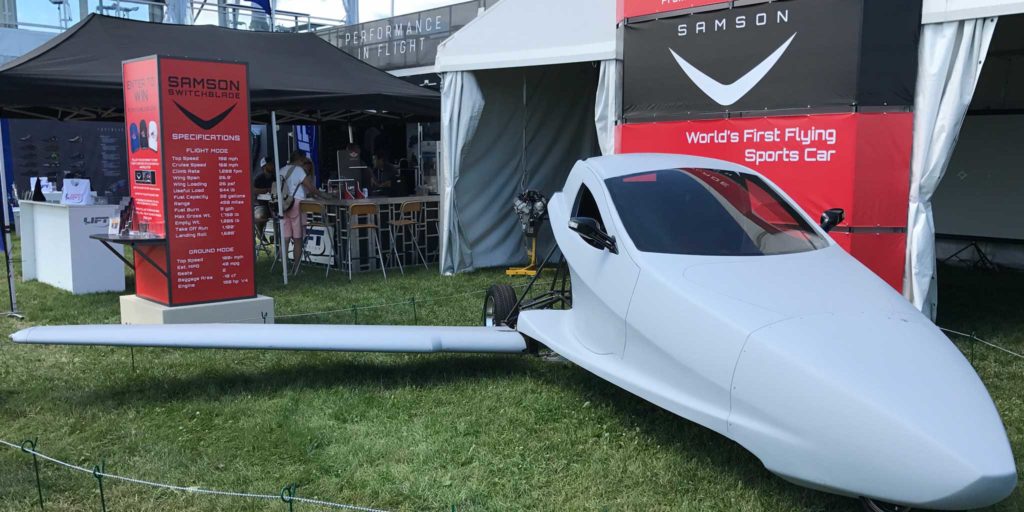 As the seemingly unattainable dream of developing a marketable flying car continues, the latest entrant unveiled its prototype this morning at EAA AirVenture in Oshkosh. Oregon-based Samson Sky is exhibiting a pre-production prototype of its three-wheel-drive Switchblade Flying Sports Car kit, which it claims will have a power-to-weight ratio similar to that of a 2017 Chevrolet Corvette. While not completely assembled, the prototype on display demonstrates the patented retractable swing-wing mechanism that its developers say will distinguish it from all other previous flying car attempts.

“For a commercially viable flying car, we felt that protecting the flying surfaces while on the ground was critical to success,” said Switchblade designer and company CEO Sam Bousfield. “Can you imagine going into a restaurant while travelling and not knowing whether some careless driver damaged your wings or tail while you were not around? That would put some severe limitations on how you might use a flying car.”

First flight for the vehicle, which will be sold primarily in kit form, is expected this fall, with deliveries to begin approximately a year later.

According to the manufacturer, which has been working on the craft for the past nine years, the Switchblade will be powered by a 190-hp turbocharged V4 engine, which would give it a 200 mph top speed in the air, with a better-than 1,500-feet-per-minute climb, and a range of 400 miles with a useful load of 544 pounds. The company tested its agilty on the ground on a slalom course, where it compared favorably to vehicles with a comparable wheel base. The transition from automobile to aircraft is automated and will take approximately 45 seconds, Bousfield told AIN.

Composites will account for approximately 90 percent of the body, and Samson plans to use new UV-cure carbon fiber processes in its manufacturing techniques that could reduce part production times from nine hours to just one. “If that isn’t a game changer, I don’t know what is,” said Bousfield. Another process involving polypropylene can slash that time even further, producing parts in minutes.

The company says it has sold 58 Switchblade kits, which are listed at an estimated $140,000 including engine, transmission and avionics along with a builder assist program and a ballistic parachute safety system. The company noted it expects the roadable aircraft to be licensed initially as experimental with certification to follow. In areas that permit the sale of completed experimental aircraft such as Hong Kong, the Middle East, Japan and South Africa, the company will offer limited edition models with customized interiors, with prices starting at $400,000.