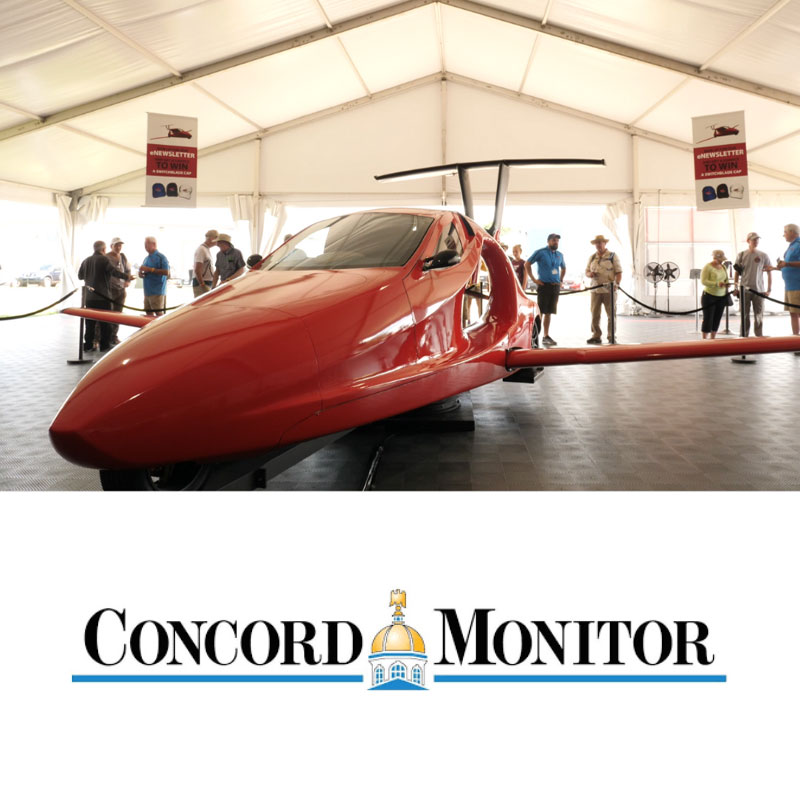 When it comes to New Hampshire’s future with flying cars – or “roadable aircraft,” to give the preferred term – advocates have their main argument ready.

“Somebody’s got to go first. Why not us?” said Rep. Steven Smith, R-Charleston.

Smith was speaking Thursday evening to a room full of legislators and state employees at a presentation by Terrafugia of Massachusetts and PAL-V of the Netherlands. These two firms with a New Hampshire presence are developing separate versions of two-person airplanes that can fold up their wings and propellers and be driven on public roads. The evening included a video presentation from a third such company, Oregon-based Samson Sky.

“You’re hearing from between 60% and 100% of the roadable aircraft marketplace,” noted Mark Jennings-Bates, vice president of PAL-V, which has opened an office near Manchester airport.

None have vehicles commercially available but Terrafugia, which is flying a prototype at Nashua Municipal Airport, and PAL-V both hope to start selling a few vehicles as early as this year. Numbers would probably be limited to scores or perhaps hundreds over the next few years.

“It will be a very, very slow start,” said Kevin Colburn, vice president of Terrafugia, responding to questions about whether the technology could crowd the state’s airspace or roads. “We’re not Honda.”

The spur for Thursday’s meeting, held in the office of National Flight Simulator, a pilot-training facility on Ammon Drive alongside the Manchester-Boston Regional Airport, is a bill (HB1517) that tackles one of the thorniest issues for this technology. Flying vehicles and driving vehicles face different and sometimes conflicting safety and licensing regulations for everything from windshield design to engine types to stability of the steering wheel.

“A change in ground regulations might make meeting flight regulations not tenable, and vice-versa,” said Sam Bousefield, CEO of Samson Sky in a video presentation.

Smith, who is the bill’s lead sponsor, said it was a first step to making New Hampshire amendable to a technology that is closer than it seems. The goal is to make it so that when a craft is certified by the Federal Aviation Administration and gets an annual flight inspection, that will suffice for road-worthiness certification and state highway inspection. The bill does not have a hearing scheduled.

“We can make this a model. It can be a model for other states,” said Terrafugia’s Colburn regarding the legislation. “They would look here to see how to make it happen.”

None of these models meet the idea of a flying car usually seen in cartoons because they don’t take off from public roads or land in front of a home garage. They have to use airports or airstrips, just like private planes.

The makers say their advantage over planes is the “last mile” issue. Owners could drive to any of more than 5,000 airports in the country, take off and fly to another airport, then drive to their final destination without needing to have ground transportation available. This is likely to be valuable to businesses that have far-flung operations, especially those in areas far from major airports.

All three models have several things in common. All require a pilot’s license to operate, use premium gasoline rather than special aviation fuel, have convention drive trains when traveling on the roads, can fit in a single-car garage, and fly via rear-mounted propellers that push them through the air.

All share some drawbacks. They must have repairs done by certified aircraft mechanics – “Your local garage can’t lay a wrench on these,” Smith noted – and each will cost at least $400,000 in the beginning.

Terrafugia is the best-known here because it is based in Massachusetts, where it was founded in 2006 by five MIT graduates, and has had a presence in Nashua for more than a year. It was bought by Zhejiang Geely Holding of Shanghai, China, in late 2017.

Its vehicle, the Transition, is a four-wheel car with wings that fold up on each side. The Transition has been licensed by the FAA as a light sport aircraft, which reduces the amount of flying time needed to get a pilot’s license but puts certain restrictions on its use, such as the inability to use it to carry passengers.

The PAL-V is a three-wheeled vehicle that flies as a gyrocopter, a sort of simplified helicopter that helps keep it aloft and allows it to have smaller wings. It is certified as a general aviation craft that requires a private pilot’s license to fly. It opened a sales office last year overseen by Keith Ammon, a former state representative who helped organize Thursday’s meeting.

The Samson Sky is also a three-wheel vehicle. It is a “kit” aircraft, also known as a homebuilt plane, that must be assembled by the pilot. Homebuilt planes are common at airports, comprising about 10% of the total non-comm ercial aircraft fleet.